It’s amazing the number of times I’ve done something I said I would never do.

You can file letting the dog, in this case Miss T, on the bed into that particular category. Yep! Said I’d never do it and yet, I crawl onto the bed and there she is.  Assuming she didn’t beat me there of course. 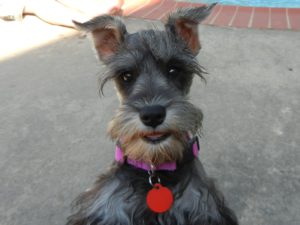 that “please pick me up” look. If that doesn’t work then I get the Jedi mind thing from her, commanding me to pick her up and put her on the bed. It’s hard, no, impossible to resist.  Most of the time? No big deal. I stop what I’m doing, pick her up and plop her down beside me on the bed. She only weighs 12 lbs so the effort isn’t an issue. But what is an issue is the timing of her requests.

On almost a nightly basis, Miss T jumps down off the bed and heads to the bathroom. No, she’s not potty trained. That’s where her water bowl resides.

More often than not she tromps over my sleeping body to get to the side of the bed where she can jump down. Which side is that? It’s which ever side causes her to have to crawl over me to get there. If she’s sleeping on the right side and I’m between her and the left side of the bed then she crawls over me to get to the left side. If she’s more to the left side and I’m between her and the right side then guess what? Yep, right over the top of Dave before jumping down and heading off to get her drink on. The most amazing part of all this is that somehow, during the night, she gains about sixty pounds. Or at least that’s what it feels like when she steps on me when on her way to the bathroom.

But that’s not the real problem. Its when she comes back. Now remember, she could jump back up in the bed if she wanted to. I’ve seen her do it. But apparently, after tanking up on water, she’s either too heavy for liftoff, or the sloshing sound in her belly is too disturbing to attempt a jump. So again, shes on her back legs, scratching on the side of the bed so I’ll wake up and put her back in the bed. Needless to say, I’m not a happy camper when awakened in the middle of a great sleep/dream.

Then it hit me. Of course!! Stairs! She needs stairs to get on the bed! Brilliant!!

I searched Amazon and sure enough, dog stairs for small dogs! Problem solved.

Well… the problem was partially solved. Now I had to decide which stairs to buy.  Who knew there were so many different styles, sizes, colors and materials.

After considering all the options and considering which stairs the little princess would actually use, I finally decided on some Wooden Dog Stairs.  They seemed sturdy, matched the bedroom decor, and most importantly, looked nice.  I ordered them, got them shipped to me as promised and set them up against the bed. Then I had Little Miss T test them out. She approved. Finally, I was going to get a night of mostly uninterrupted sleep. (Remember, she was still going to crawl over me to get out of bed). Life was good. Sort of.

There was one little detail I forgot to consider.

Occasionally, I too get up in the middle of the night to go to the bathroom.  Unlike Miss T, I AM potty trained and no, that is not where my water bowl is.

I know what you’re thinking… too much information, Dave.  Maybe, but stay with me here. There’s a point.

I’m pretty sure that the pain of cracking a toe against a more or less solid wooden object in the dark when half asleep is exponentially greater that it is when done fully awake in the daylight. I may or may not have uttered some things that cannot be printed here… or anywhere else for that matter. Only the dark and Little Miss T know for sure. (I’ve sworn her to secrecy)

So back to Amazon to find some stairs that were sturdy but not made of wood or anything else solid like that. I found some Plastic Dog Steps this time, covered with a nice soft cloth. And lightweight which meant they would give a little if I tripped over them.

I installed them, she loved them, life was good. (it’s always good, but now it was a tiny bit better) She could get her drink, get back in bed and not wake me to pick her up.  Problem solved. Yay!

The truth of the matter is I did trip over the new, lighter, softer plastic stairs a few nights later. It still hurt like hell.

Hint: If you do get dog stairs for your small dog to use to get on the bed, you might want to consider installing a night light on them or at least somewhere nearby. You’re welcome.

10 thoughts on “Stairway to Heaven – Dog Stairs for Small Dogs”